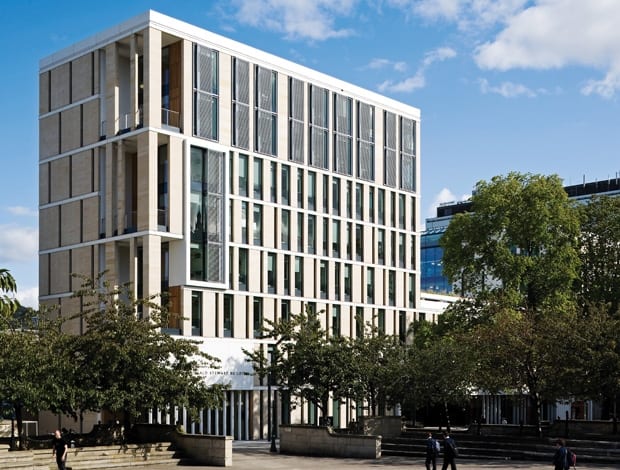 Edinburgh University’s Informatics Forum is at the forefront of scientific research, facilitated by an equally cutting-edge building

Professor Michael Fourman, head of E-Science at The Informatics Forum, claims he works in the best building in Scotland. Few would argue, including the Royal Incorporation of Architects in Scotland, which last year gave the Potterrow Building the Andrew Doolan ‘Best Building in Scotland’ award.

With its transparent atrium, internal spiral staircases and roof terraces (where departmental barbecues are a frequent occurrence) overlooking Arthur’s Seat, Potterrow is Edinburgh University’s latest asset and the first phase of a major new masterplan. The Informatics Forum, which forms part of the new development, has been designed  to stimulate cutting-edge scientific research – in this case, into informatics (artificial intelligence and robotics).

Considering the university’s standing as one of the world’s most advanced research organisations at the forefront of the virtual community, Potterrow is very much married to its physical surroundings.

As Rab Bennett, director of architects Bennetts Associates, explains, this sense of place was important from the outset: “We were always keen to retain the area’s historic urban grain.”

The Informatics Forum has been built where a disused car park used to be, on a key pedestrian route to the city centre. The building is spread across two sites, with a public square in the middle designed as a diagonal through-route to bring people through the square and connect the building with Edinburgh’s centre.

“Little, informal pedestrian routes are a part of this area of Edinburgh and we wanted the ground floor of the building to really give something back to the street,” project director John Miller explains. As well as a café and forum, commissioned artists will be generating work for a ground-floor gallery space to communicate what goes on in the building.

While the researchers overwhelmingly work from cellular labs and offices, animated corridors around the building make the journey around the quadrangle as interesting and interactive as possible. Group networking spaces littered with brightly coloured cushions and coffee points are visible from every floor.

“It sounds like rhetoric, but in an environment like this, bringing people together is how the next big ideas happen,” Fourman explains. There are close to 60 different nationalities, and between 500 and 600 researchers working in the building, from a range of backgrounds including chemistry, geography, art, medicine, maths and IT.

The department wanted a space where everyone would congregate in smaller groups, both formally and informally, and wanted to aid this process through architecture. “We have been researching these ideas about office buildings for years, so this was music to our ears,” says Fourman.

The ‘wormhole’ staircases, hung from the edge of the floorplates, are designed to make the floors less isolated from one another. Fourman produced a mathematical diagram of how limiting it is to only aggregate people horizontally, and how many more places people encounter one other if you introduce an easy vertical dimension. “It has changed the way the building works – you get used to nipping between floors,” Fourman explains. “The places without them feel less connected.”

“It sounds like rhetoric, but in an environment like this, bringing people together is how the next big ideas happen”

John Miller thinks that Fourman’s equation “should be fundamental to educational and health buildings. With increasingly fancy ways of communicating at a distance, architects have increasingly been asking the question: ‘Do we need buildings at all?’ I think this building shows you need both.”

A post-occupancy survey by an architectural psychologist, using RIFD tags voluntarily worn by staff, should throw up interesting results about how the building is being used, and how the design has worked.

“The Holy Grail for architecture is the scientific relationship between good design, improved productivity and occupant wellbeing,” explains Miller. “This is an important project for office and educational building design.”

The informatics building was first to get an Excellent BREEAM rating in Scotland, and it also achieved this rating for its construction – despite it not being part of the guidelines when the building was designed.

The building incorporates thermal mass, mixed ventilation and composite heat and power. “The university’s specialist environmental coordinator had the foresight to insist on common-sense, centralised building measures,” says Miller. “This will ensure it performs well, long after we have handed it over.”

For the exterior, Bennetts Associates was faced with the challenge of finding a facade to fulfil civic demand: as well as being part of a historic university, the building sits in the most historic part of Edinburgh, just on the edge of a world heritage site.

“Most of Edinburgh is built from stone from a quarry in West Edinburgh that ran out years ago, although there are two or three creamy sandstones that are relevant to new buildings in Edinburgh,” Miller explains.

As a result, the natural stone for the facade came from Germany and was pre-cast in Belgium – one of only three places with the facilities to create such large-scale pieces. In a comparatively economic route, the whole facade was shipped to Leith, and transported to Edinburgh, where it was erected in one whole piece, “without even need for scaffolding,” as Miller explains.

Phase two will see another department built, facing onto the courtyard, which will be covered in polished white cast stone, and planted with silver birch trees. “It won’t be one of those stuffy educational institutions with a great placard on the wall,” Miller says.

In fact there is nothing stuffy about this research institute. Science and maths are the lifeblood of the informatics school, Miller explains, and for ten years they have been researching intelligent buildings, the kind that greet you as you walk in the door, and tell you who is in and out of the building. “The technology is all there, and it’s the intention of the department that with future funding it’s all unrolled in this building.”